Mode4 amps have a hybrid design with a valve pre-amp. and a solid-state (transistor) power amp, putting out up to 350 Watts. But that amplification needs some cooling, and so, unlike most valve amps, the Mode4 has two small fans to boost airflow over the heatsinks in the solid-state amp.

My Mode4 amp was basically working fine, but had one annoying problem. When the amp was first switched on, the cooling fans would buzz like angry bumble-bees. After a few minutes of noise, the fans would continue spinning at the same rate, but the buzz would disappear, leaving only a quiet whoosh of moving air.

It didn’t take long to get sick of this buzz on startup, so I ordered two high-quality low-noise Nanoxia replacement fans, and installed them. It was a very easy job, with satisfying results. I did have to cut off the pc-style connector on the new fans, & splice/solder the wiring onto the existing wires in the Mode4, but if you can solder that’s easy.

Unfortunately I wasn’t thinking of my future blogging needs, so I only took a couple of photos with one of the old fans hanging out. I didn’t take any photos of the new fans in-place.

Still, if you need to do the same repair, you can see what fans to order here- the old fans are a standard computer-style fan, model DF2406SL – 24V, 60mm x 60mm x 20mm, sleeve ball-bearing, low-speed fan.

I can definitely recommend the Nanoxia Deep Silence 60mm Ultra-Quiet PC Fan, which I got from QuietPC. They’ve been quiet as a mouse for 7 years now. The Nanoxia fans have a nominal 25 mm depth, where the original fans were only 20mm – but the 5mm extra depth did not cause any problems: 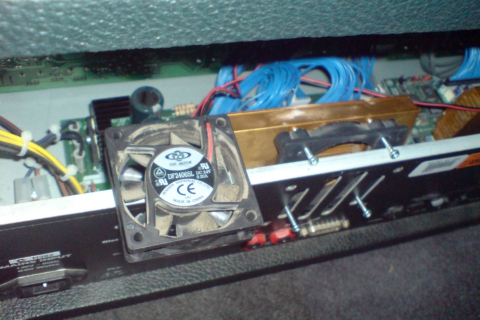 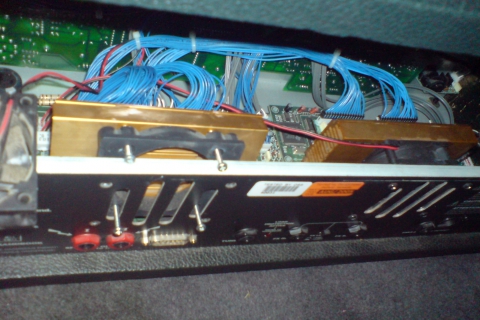 Note: this is an easy repair if you can solder & you know how to work on electrical equipment safely – but be aware that amplifiers are a little unusual compared to many other electrical devices, in that the heatsinks are not isolated from the power amp mosfet collector/drain. If you apply power, the heatsinks (and the screws which hold the fan to the heatsink) get a significant and quite possibly dangerous, or even deadly voltage. Keep the power off, so you don’t electrocute yourself or blow up your amp by shorting the heatsinks/fan screws onto the chassis or anywhere else.